The ridiculous spikes, fueled by the Bank of Canada’s interest rate cuts and QE, ease metro by metro, some at lightning speed, others a bit more leisurely.

By Wolf Richter for WOLF STREET.

The Canada MLS Home Price Index, which tracks all types of homes, fell 1.3% in November from October and is now 16.4% lower than its peak in March 2022, according to data from the Canadian Real Estate Association (CREA ). This brought the year-on-year decline to 4.4%.

In the eight months up to the top – so from July 2021 through March 2022 – the reference price had increased by C$162,800. In other words, it has fallen somewhat less rapidly than during the latest phase of the Bank of Canada’s interest rate repression and money-making campaign, which ended in March 2022 with its first tentative rate hike. that was when house prices spiked.

According to CREA, sales volume fell 38.9% year-on-year in November. Buyers have gone on strike due to the combination of still sky-high house prices and now much higher mortgage rates. Potential sellers have also gone on strike; instead of putting their vacant homes on the market, they think, “and this too shall pass,” and wait for the sudden end of inflation and a Bank of Canada pivot. Each month they’ve waited, they’ve been rewarded with further price drops. It turns out that whoever panics first, panics best. 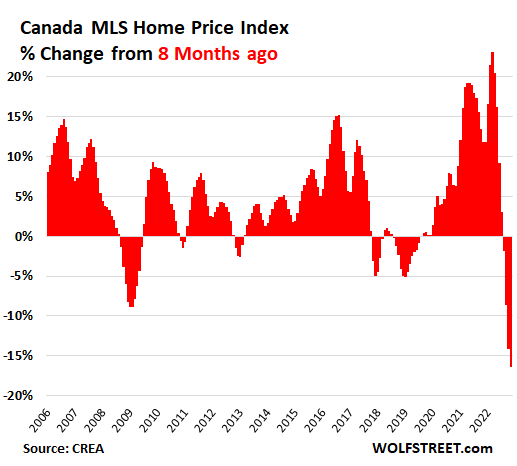 Greater Toronto: The composite benchmark price was down 0.8% for the month to C$1.284 million, down 18.4% since its peak in March and down 5.5% year-over-year. The price is roughly back where it was in September 2021. 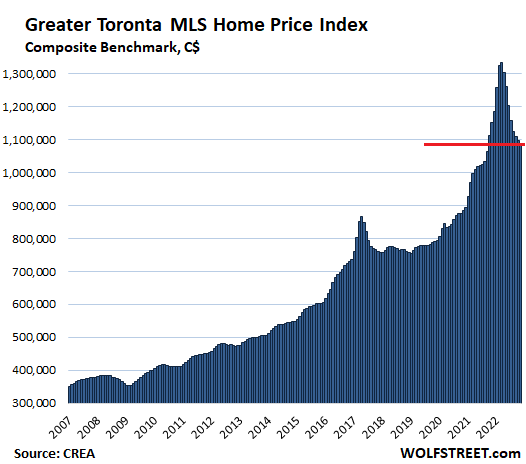 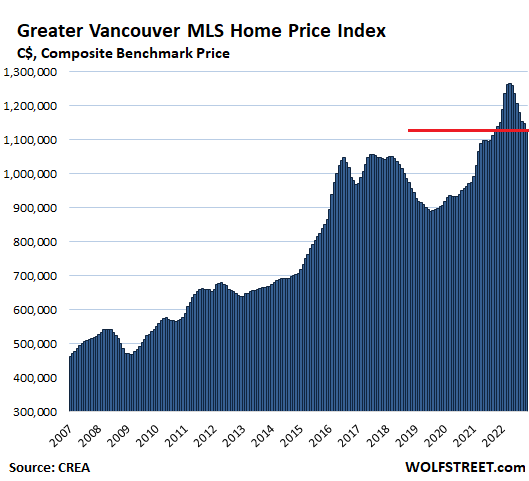 Hamilton–Burlington Metro: Prices tend to move in parallel with Toronto, albeit at a lower level. But in the 22 months between the start of the Bank of Canada money boom in April 2020 and the peak in February 2022, the composite benchmark price exploded by 71%, which is totally crazy. But then it started to unwind and is now down 22.2% in 9 months.

During those 9 months since the peak, the price fell just a little faster than in the 9 months leading up to the peak:

Spikes like this in real estate are just funny – and a testimony to the utterly silly consensual hallucination that pervades the bubble markets: 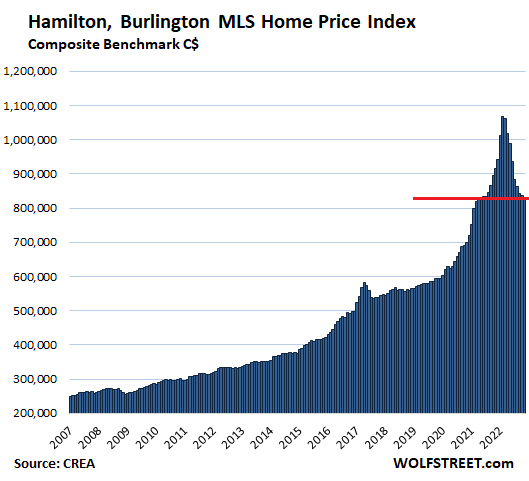 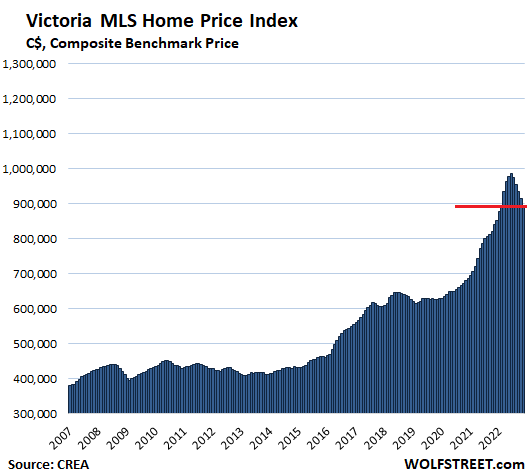 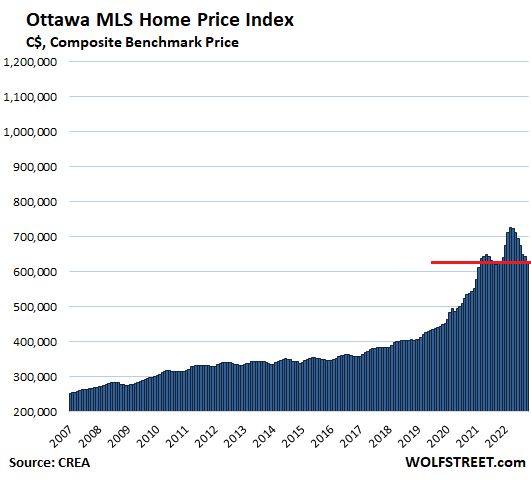 CalgaryCanada’s oil capital. Despite the oil boom that started in 2021, prices have now turned south. The composite benchmark price fell 0.7% for the month to C$513,000: 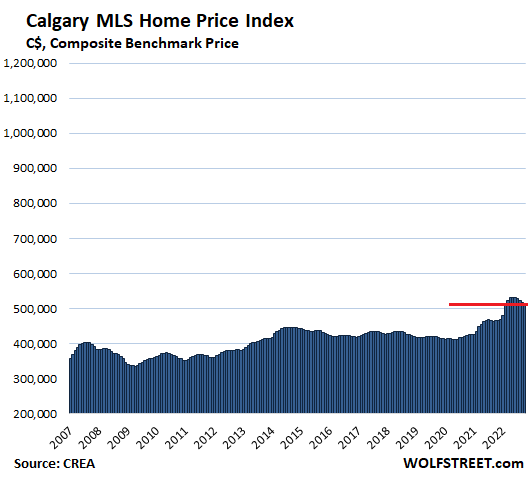 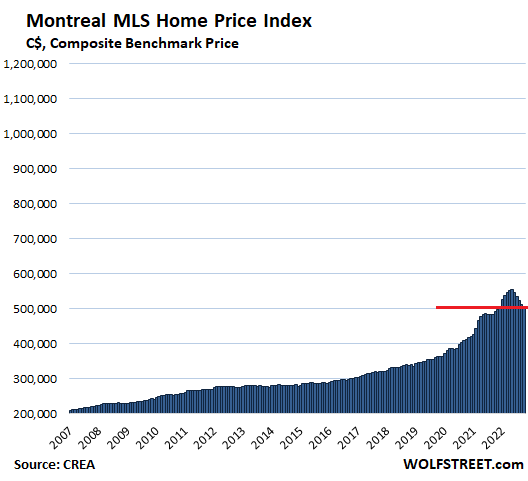 Halifax-Dartmouth, a normal housing market until it suddenly went crazy from April 2020. During the 25 months from April 2020 to the peak in May 2022, the benchmark price exploded by 82%, WHOOSH alone, as QE and interest rate suppression buyers became ‘brains to mush. And this is now winding down. 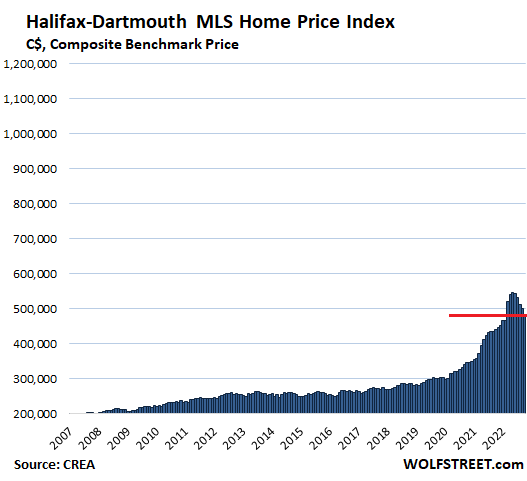 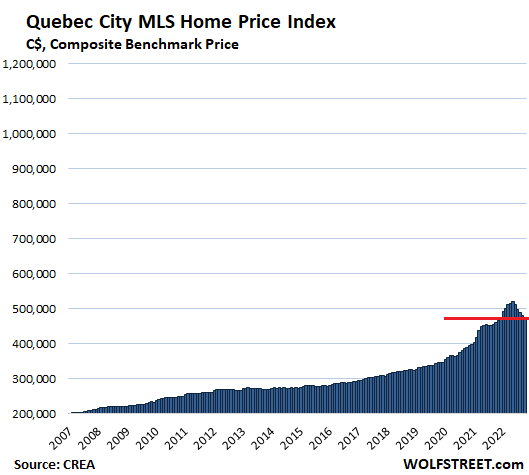 Enjoy reading WOLF STREET and do you want to support it? You can donate. I really appreciate it. Click on the beer and iced tea mug to see how:

Would you like to be notified by email when WOLF STREET publishes a new article? Register here.